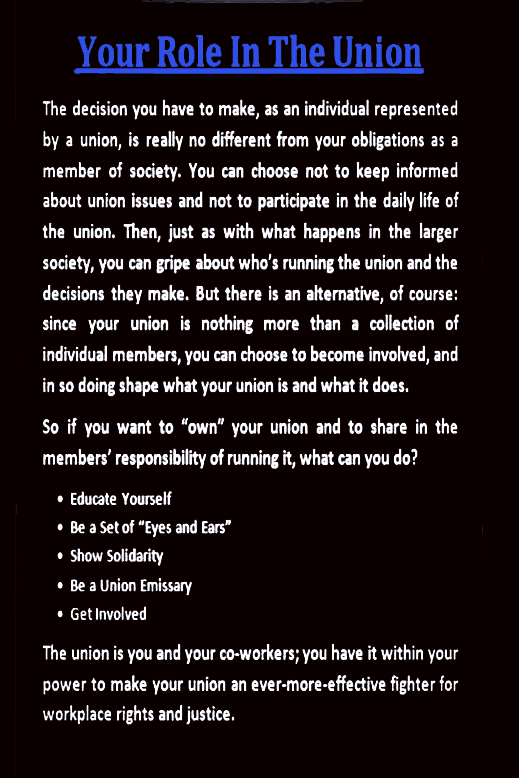 1) every member will receive $150 for signing up a new member.  They may elect to give any monies received to the new member if they choose to do so.

2) Only members of the APWU are represented in the event an EEO needs to be filed.  Non Members are on their own with no APWU support, advice, or help.  They must pay for a lawyer or other legal counsel.

3) Only members are allowed to vote in the local elections.  Non members have absolutely no voice whatsoever in the business affairs of the local.

4) Members have a meeting usually once a month at the local SAAAL Union Meeting Hall and are offered a chance to ask important questions and get answers from the leadership that day.  They are also offered a meal with refreshments and at times raffles or drawings plus the monthly drawing of a door prize.

5) Only members get discounts on the APWU health plan which happens to be one of the cheapest plans out at the moment.

The following is a list of common reasons non-members give for not joining, and some responses that will give them something to think about.

REASON 1: I can’t afford the dues.

RESPONSE: Could you afford to work for $7 an hour? That’s what you would be making if there were no union. You don’t really believe the Postal Service gives you raises out of the goodness of its heart, do you? You saw the wage package they proposed in the last contract negotiations. They think you make too much. Management wanted to freeze your wages, cap the COLA and cut benefits. You’ve got it backwards. Given what management wants to do to our pay and working conditions, we can’t afford not to pay union dues. The union is all that stands between our paychecks and management’s give back demands. Don’t you want the best contract negotiators, union advocates, and stewards working on your side? The union can’t afford them with out you dues money. Can you afford to have the second best negotiator on your side at contract time? Can you afford to have less than the best trained steward or advocate representing you when your discipline or termination is on the line?

REASON 2: I don’t believe in unions.

RESPONSE: Do you believe in termination without just cause? Do you believe in child labor? Slave wages? No retirement system? Straight pay for overtime? 84-hour workweeks?Monetary fines for breaking rules that management set up solely to be able to fine you and get their money back? Didn’t they teach history where you went to school? All those things happened before there were unions. Some of these still happen in other countries, and in non-union labor industries in this country. Unions are the only means for the workers to deal with management on an equal basis. Unions, not businessmen or bosses, brought this country into the 20th century. How can you believe in America and not believe in unions?

REASON 3: I don’t need to be a member. I get everything that members get without paying the dues. That’s the law.

RESPONSE: Is it? The law says only that raises apply to non-members as well as members, and that the union must handle grievances for you. If you get injured on the job and have to fight a long compensation claim, you get no help from the union unless you are a member. If you have an EEO complaint, the union won’t represent you unless you are a member. Union insurance and discount plans are available to members only. Members alone are eligible to vote for union officers, and to ratify contracts. Only members get to choose who their union representatives are through democratic elections. Non-members have no say in who represents them. Many rights are stamped, “MEMBERS ONLY.”

REASON 4: Who needs the Union? What has it ever done for me?

RESPONSE: More than three quarters of the things that make your job worth having exist only because the union exists. If you haven’t worked here long, ask somebody who has how great a place this was to work BEFORE the unions. If the unions ceased to exist tomorrow, how long do you think you’d have the salary and benefits you have now? See responses one and two.

RESPONSE: One person isn’t the union or this local. The union is all of us. So you don’t like one person. By not being a member, you’re hurting everybody, including yourself. If you’ve got that big of a problem with an officer, then run against him. But don’t just drop out. People who didn’t like Ronald Reagan didn’t renounce their citizenship.

REASON 6: The union is just here to get trouble makers out of the trouble they deserve to be in.

RESPONSE: Yes, the union defends anybody who’s in trouble. Isn’t that part of the union’s job – to make sure everybody gets his day in court? That isn’t all the union does, though. The union works to create jobs, insure that those jobs are here for the future, improve working conditions and make sure no one’s rights are violated. Look at responses one and two. Grieving disciplinary actions is the union’s job, but it’s far from the only job.

REASON 7: I don’t want anything to do with the union. I’m trying to get promoted to boss.

REASON 8: I went to the union with a problem and didn’t get any satisfaction.

RESPONSE: Did you talk to somebody higher up? Did you bring it up at a union meeting to try to get some action? Is one bad experience really reason enough to just give up on the union? Are you sure you really had a legitimate grievance? If you don’t believe the union is handling things properly, that should be the reason that gets you involved in the union to try and change things, not a reason to get out. The union isn’t perfect, but it’s all we’ve got to protect our rights and jobs.

There Is Power in a Union

“There Is Power in a Union” is a song written by Joe Hill in 1913. The Industrial Workers of the World concentrated much of its labor trying to organize migrant workers in lumber and construction camps. They sometimes had competition for the attention of the workers from religious organizations. The song uses the tune of Lewis E. Jones’ 1899 hymn “There Is Power in the Blood”.